On the Field at the Big House 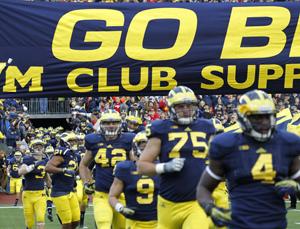 Recently, I had the change to fulfill a lifelong dream — shooting photos during a game at the Big House in Ann Arbor.


There were a number of things that were not surprising in the least. First and foremost, I have even greater respect for experienced sports photographers than ever. Trying to get a great shot amidst the fast-paced action in a space of that size requires tremendous skill and anticipation. Of course, a bit of luck doesn't hurt, either.


Although I’m pleased with the photos I got, I cannot express enough admiration to those seasoned pros who immortalize great moments far better than I ever could.


There were also a few things that surprised me. First, I was shocked at just how crowded the field is during game time. Watching many a game on TV, I never realized just how many people there are roaming around on the field.


Second, although I should have known better, there’s really no such thing as overdressing if one plans to spend an extended amount of time down on the field. Despite relatively warm temperatures earlier that afternoon, the wind gusts inside the Big House at field level are something else and I was ill-prepared for how chilly it got as the game progressed. (I did begin to feel my fingers again by the following day, gladly.)


Third, it’s easy to get caught up watching the action through a camera viewfinder, but that can be dangerous. During a few plays, I nearly got plowed over by receivers or other players charging toward the sidelines where I was stationed as I was fixated on action across the field!


A big thank you shout out to Greg Dooley over at mvictors.com for the opportunity!