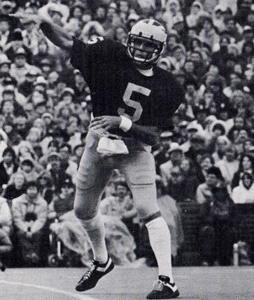 Top researcher and historian Steve Sapardanis (Doctor Sap) contributed this brief article on the history of shoes worn by the Wolverines on the field — Thank you Doctor Sap!


From as early as 1968, Michigan has seen a hodgepodge of shoe manufacturers until Nike changed all that in 1983. In 1968, players primarily wore Converse but were beginning to adopt a new shoe — Adidas. In 1971, a new shoe manufacturer was introduced — Puma. In 1975, another shoe manufacturer was added from Quebec, Canada and had a very distinct design/logo on the side of the shoe. It was a multi-studded cleat that was supposed to provide superior traction on Michigan’s Tartan (not Astro-Turf) playing surface.


In 1976, a fifth manufacturer was added to the group — some new upstart company called Nike. In some games, for example, Rick Leach wore the Puma cleats while Rob Lytle opted for the Nike shoes. After UM finally defeated OSU in 1976, senior RB Lytle was asked why he ran so hard and played so well against the Bucks. Supposedly, he remarked, “It’s gotta be the shoes!!” (kidding). By 1979, there was still no exclusive deal with just one shoe company, so players would ask equipment manager Big Jon Falk for the shoe of their choice depending on surface and weather conditions. Stan Edwards, for example, rocked the Puma on a dry clear day in 1979. But on a cold, dreary, slick day in 1980, #32 went with the Canadian/Quebec shoe for better traction.


In 1980, a sixth shoe company was added to the UM inventory of shoes — Pony. By 1982, Nike was the predominant shoe worn by the Wolverines. The Canadian shoe company was around for inclement weather game conditions, but Puma and Converse were now out of the picture. By 1983, Michigan was an exclusive Nike school and this made Big Jon’s job a lot easier in that he didn’t have to manage five or six shoe manufacturers anymore.