Catching Up with All-American Rod Payne 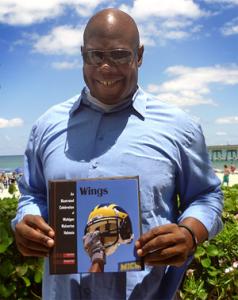 We had the opportunity to have lunch with Rod Payne, All-American center for the Wolverines during the 1992–1996 seasons. Rod’s experience at Michigan shaped his life. He related that Michigan was family. Rod was drafted by the Cincinnati Bengals and also played for the Baltimore Ravens.


Rod had a chance to see our photos and the new edition of Wings, An Illustrated Celebration of Michigan Wolverine Helmets, which will be available soon. He said the book was very unique and would be enjoyed by both fans and players. He especially appreciated the helmet gallery, spending time with the 1990s helmets, and noted, “I have one of those on my shelf!”